#5a The Story of Crypto Crisis 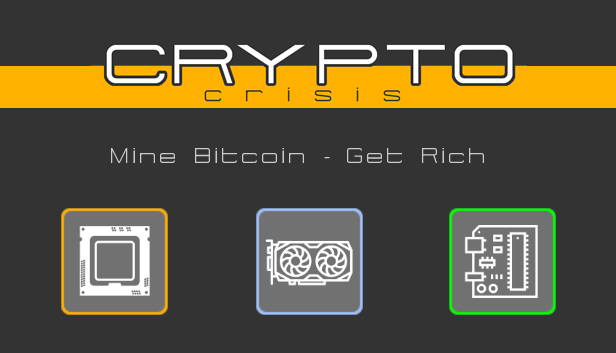 How does a cookie clicker clone that would take a ‘couple of months’ to build turn into a broad simulation with 3D environments and AI opponents?

Armoured Beans started as most studios do, with grand plans of finally working on the masterpiece that one or both of the members had spent the last few years planning for. The grand project that takes 5 years to finish and dies on kickstarter.

Crypto Crisis wasn’t that game. It was our “first game”. Like a first pancake, you can expect it to be a little deformed, bloated and soaked in too much oil. It’s a way for us to test our skills, working relationship and dealing with actual customers who play what we create.

I originally pitched “The Blockchain Game” as a quick and simple project to cut our teeth and establish ourselves in the industry. A clicker where instead of clicking for cookies each click is one hash attempt. You could buy hardware to click for you and slowly increase your hash rate. The player was the miner, so you could also cherry pick what transactions would go into each block and on successfully finding a block the whole process would be animated on screen. This way the real mechanics of mining for Bitcoin could be demonstrated.

On carefully considering the pitch, Jeremy said it was awful and suggested the changes that are now Crypto Crisis.

The first playable build was rough. Very rough. Everything was placeholder and there was no design for the interface. The question we needed to answer as quick as possible was “Is this fun to play?”.

We got the answer, and learnt one of the first big lessons. Yes, it was fun to play but finding people to play test it for us was really hard. Sending a build to friends and then checking in later gave zero feedback past “yea, I poked around. It’s okay”. That’s nice person speak for “it looked awful and I didn’t want to play it”

Presentation is half the flavour and Crypto Crisis was a bowl of pizza blended up into a smooth paste. I did some brief work building a grid based background so we could quickly build different maps and generate them on the fly. The original plan was to have 40 maps distributed over a tree so you could chose an upgrade path based on your play style. The basics were down and we started building models for all the hardware.

Still focusing on mechanics there wasn’t a single texture in the game and the UI was a hot mess of developer-art and ideas ‘borrowed’ from other games. The mechanics were solid and managed to hook players but there was no reason to do anything.

In comes our antagonist and star, Gaz. His whole purpose was to create motivation and justify the ‘target amount’ we settled on during the initial balance of the game. He would call every now and then -leaving a message on an answering machine- to remind you that he wanted his money. Here comes the second big lesson. Story is important. Never should it be shoehorned in to fill a gap. We should have come up with a story and then balanced around that, creating a story from arbitrary number and a setting leaves it empty and without impact.

Initial response from the community was a very loud “meh”. The first few reviews and articles we read were aligned with the state of the game. All mechanics and no substance. It looked terrible and played okay.

While finishing the mechanics we had some good input from the community. The loudest were a few quality of life features, a demand for a better story, and an easy mode. The first few releases were brutally hard and demoralising.

Starting on the textures we discovered that the grid system for the maps wasn’t going to work. The time it would take to make perfectly tiling textures for each grid piece would blow out quickly. Especially with the number of maps that were planned for. I suggested we drop the grids and make custom models for every environment. This would make things look much better but would limit the number of environments we could release with the game. A tough trade off but based on the initial reception of the game, we could pack it with content but if it looked bad no one would play it anyway.

Around the same time, Jeremy started working on the Tech tree. A dropped feature that would allow the player to “upgrade” different aspects that persisted from play to play. This would add some progression and make the game easier. I bit like a roguelite. The feature was eventually dropped as it would be hard to balance and adding a feature like that mid development would be too disruptive. By the way; this was the first half of the third biggest lesson we learnt from Crypto Crisis.

The second half was spurred on by a need to create a better story. We tabled many ideas, from animated cut scenes to mini games that would introduce the story. Keep in mind that seriously proposed to rip out the current story and re-imagine it in the last month or two of production.

How could some one generate that much debt? Gambling? International political intrigue? We even pursued two professional writers to put a story together. After a few weeks of not getting anywhere I decided to “just expand on the current story”. Jeremy proposed a reason for the debt and a script was written, actors were found and the “Phone” was created. Moving the narrative into the background the phone would be there if you wanted but it wasn’t as intrusive as the original voice over from Gaz. If you wanted a story, you could get it. If you just wanted to enjoy the game itself, the phone would just buzz mostly hidden away.

The third lesson was; Planning.
Make sure you have everything in place before you start building the game. Story, mechanics, key events, interfaces, everything! At the end of the build is the worst place to introduce a key part of the game.

The last; and probably the most painful lesson to accept is that human desire is infinite in a finite world. With Crypto Crisis, we needed to build a game of reasonable quality that was playable and released within a year. We achieved that goal but we were forced to make a lot of sacrifices along the way. The real truth is that you can’t please everyone, not even yourself. If we had another year or two there’s a huge list of things we want to do with Crypto Crisis. It would be a much better and more polished game given enough time but you need to move on, take your punches, and apply your lessons to the next project.

Want to give a special thanks to ‘Ziggie’ for helping us track down a nasty bug that plagued the game for months, and ‘Chronicles’ for his detailed review pointing out the absurdities of the game.

Feel free to drop into our discord server if you want to discuss all things Crypto Crisis and thanks to all of you in Early Access that helped us bring this project over the line.